Through the Eyes of My Students 2

Last fall, in response to some blogosphere noise asserting that there was no such thing as arts entrepreneurship, I posted some of my students’ articulations of the construct as written on a course discussion board. This semester, students are reading Andrew Simonet’s downloadable eBook, Making Your Life as an Artist, and for this first assignment, Barry Hessenius’s interview of Aaron Dworkin, a selection from David Cutler’s The Savvy Musician, and a short blog post from Kimberly Bryant on practical thinking for arts entrepreneurs. We spent the first two class sections getting to know oneanother and discussing arts entrepreneurship as an ACTION, an action that positions the artist in relation to society. 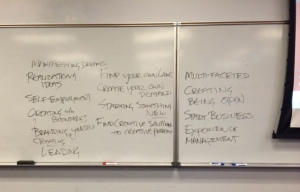 The first discussion prompt for the semester reads: “In our first week, we discussed entrepreneurship as an ACTION. In the first set of readings, Aaron Dworkin serves as an example of a cultural entrepreneur and Andrew Simonet talks about the artist’s “sacred responsibility” to culture.  Drawing on these two concepts and the other reading for this week, describe what it means TO YOU to be an ‘arts entrepreneur.'”

Here are just a few of their responses.

Linda Essig is Dean of the College of Arts & Letters at Cal State LA and principal/owner of Creative Infrastructure LLC. The opinions expressed on creativeinfrastructure are her own and not those of Cal State LA. You can follow her on twitter @LindaInPhoenix.
View all posts by lindaessig →
This entry was posted in Arts education, Arts entrepreneurship, Higher education. Bookmark the permalink.

6 Responses to Through the Eyes of My Students 2