Tbilisi, Day 3 – Cultural Diplomacy (or, a conference and a feast)

Although I was in no way officially representing the United States, my role at the conference hosted by Creative Initiatives on my 3rd day in Tbilisi was to provide an overview of US arts and culture incubation practices. I was able to draw on my research in this area, and specifically on an in-depth cross-case analysis of four arts incubators of different types: Arlington Arts Incubator, Intersection for the Arts, Center for Cultural Innovation, and Mighty Tieton. I explained that arts and culture incubators lower barriers for individual artists and small arts organizations through direct service provision, reduced transaction costs, and knowledge sharing and by providing a “seal of approval” and risk safety net that taken together enable greater artistic risk-taking as well as individual or organizational self-sufficiency and sustainability.

The conference included several Georgian government officials from the Ministry of Culture and the Ministry of Economy and Sustainable Development, as well as the Estonian and Lithuanian Ambassadors to Georgia. As someone largely unschooled in cultural diplomacy, I was fascinated to hear about how these three countries are working individually, together, and with existing EU initiatives to build support infrastructures for the arts and culture (i.e., creative industries) sector. 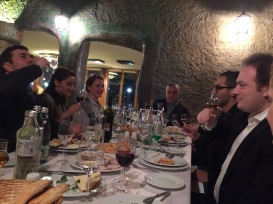 And then there was the Georgian Supra. A “supra” is a feast at which there is much delicious food and many many toasts. Irakli Kashibadze (far left), the chairman of the Georgia Innovation and Technology Agency, hosted this event for the conference organizers and their foreign guests, which included myself and two gentlemen from Russia who had presented on a co-working and event space they developed in Moscow. Kashibadze served as the “tamada,” or toast master, pouring glass after glass of “chacha,” a Georgian liquor similar to grappa, often insisting on a “bottoms up” approach to his toasts to, variously, the future, collaboration, creativity, and so on. While I was clinking glasses in a toast to friendship between the US and Russia, the two countries and the rest of the UN Security Council unanimously agreed to a roadmap to a diplomatic solution to the Syrian civil war. To the future, indeed!

Linda Essig is Dean of the College of Arts & Letters at Cal State LA and principal/owner of Creative Infrastructure LLC. The opinions expressed on creativeinfrastructure are her own and not those of Cal State LA. You can follow her on twitter @LindaInPhoenix.
View all posts by lindaessig →
This entry was posted in Arts entrepreneurship, arts infrastructure, Arts policy, Culture and democracy and tagged arts and culture sector, arts incubators, Creative Industries, creative infrastructure, Creative Initiatives, cultural diplomacy, Estonia, Georgia, Georgian supra, Lithuania. Bookmark the permalink.