I am not a particularly observant religious Jew, but my Jewish identity is still very important to me. Chanukah is a festival holiday, one that commemorates an historical event, rather than deeply spiritual holy day like Yom Kippur or the Sabbath. When I was a teenager, my pacifist self was disturbed by the hanukiah my mother dug off a bottom shelf each year. It depicted a line of heavily armed Maccabees entering the gate of Jerusalem to save the Jews from oppression. I’m not an expert on either the history or the religion, but it is unlikely that a group of religious zealots who had been camping out in the wilderness would look this put together. Like so much of religion, this view of Judah and the Maccabees is the stuff of myth. However, that doesn’t mean there isn’t something important in the Chanukah celebration, which seems more relevant now than ever before in my life.

The story is, in its essence, about a fight against an oppressive regime that sought to coerce Jewish assimilation into Hellenic culture. And it is about repairing something that was broken (more on that below). Growing up in New York, I had not been aware of this particular form of insidious coercive influence until my 10th grade English teacher required a paper due on Yom Kippur (and he would accept it neither early nor late). Now, living far from New York in a predominantly Latino and Asian/Asian-American part of LA, the signs and symbols of my culture are few and far between. My cultural practices are tolerated, but poorly understood: “Why can’t you celebrate Christmas? It’s not really a religious holiday.” (I’m sure that practicing Christians of all denominations would likely disagree.)

While the coercion is subtle, the oppression – or attempts at it – are not. Something shifted for me when right wing demonstrators in Charlottesville two years ago chanted “Jews will not replace us.” How can I list my race as “White” on demographic forms when there are large groups of White people who don’t consider me such, while also acknowledging that I benefit from the appearance of Whiteness? We live in a country where oppression is more rampant now than at any time in my life: Black people are profiled (or shot) at traffic stops; people of color are stopped at the border and some held in cages; and women still earn just 79 cents for every dollar earned by men. So…this part of the lesson of Chanukah need not be about Jews at all, but about persistent resistance. As a Jew (as a human, really), I resist this injustice where I see it through words, actions, and the Jewish notion of Tzedakah – not “charity,” but “justice,” — sharing what I have to try to “balance the scales” toward the oppressed and less fortunate than I.

For me the other important lesson is that of repair, in Judaism “Tikkun Olam” or “the repair of the world.” The Maccabees made it into the Temple to find that the menorah was broken and most of the oil was gone. For me, the miracle isn’t one in which God makes the oil last for eight days, but rather one in which a community of people work together to keep the light burning and repair the Temple. It is only through community collective action that we can repair the world – and boy does the world need fixing now! 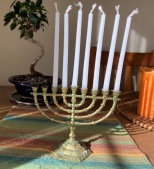 So…I light my candles, using not my mother’s militaristic hanukiah, but this more neutral one that I bought when I was in Israel forty years ago. I light the candles to remind myself and my family that only if we work together can we resist the oppression of all people and repair the world.

Please consider supporting the organizations that will benefit from my own family’s commitment to “Tzedekah” this season:

A couple of posts of interest:

Linda Essig is Dean of the College of Arts & Letters at Cal State LA and principal/owner of Creative Infrastructure LLC. The opinions expressed on creativeinfrastructure are her own and not those of Cal State LA. You can follow her on twitter @LindaInPhoenix.
View all posts by lindaessig →
This entry was posted in Culture and democracy, Personal infrastructure and tagged Byte Back, Chanukah, CHIRLA, Hanukah, hanukiah, Judaism, Maccabees, menorah, oppression, RAICES, religion, resistance, Tikkun Olam, Tzedakah. Bookmark the permalink.