Posted on December 6, 2017 by lindaessig

Photo from the LDI website is a view of the show floor with about 24 people; all of them are men.

LDI is an entertainment technology trade show held every November in Las Vegas. When lighting design was central to my creative activity and scholarship, I attended every year. This year, 2017, I attended for the first time in six or seven years. I wanted to see what had changed in technology since I was last there (a lot) and see what might still be the same. As expected, there have been some sweeping technological changes thanks to advancements in LED technologies. What is the same is the demographic makeup of the attendees: predominantly white, and overwhelmingly male.

I’ve been teaching in or adjacent to theatre production programs for a long time. My observation, backed up by actual data, is that there is significantly more gender parity among students interested in entertainment technology than in the entertainment professionals on the show floor. Why and where is the breakdown in the professional pipeline to entertainment technology? I last looked seriously at this gender disparity in a 2005 article for Theatre Design & Technology, finding that approximately 22% of lighting designers are women. I expected there would be more parity by now, but in 2016, Porsche McGovern, writing for HowlRound found even worse results – 20%. Entertainment technology is different than entertainment design, and traditionally even more male dominated. So again, I wonder, what contributes to the lack of women in positions as production electricians and riggers?

While I was at LDI, I met a female electrician and rigger, Krissy Kenny. She, like me, was looking around and questioning why there aren’t more women working in entertainment technology since there were plenty of women studying production in college. Overt bias is an unlikely single cause. Sexual harassment exists and is certainly a factor, but has abated since I started in the business in the 1980s (when I was routinely harassed, or worse). But implicit bias and gender stereotyping exists everywhere. 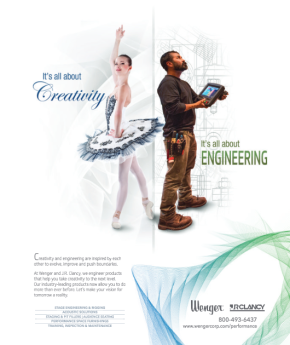 Exhibit A is this ad from Wenger (a staging manufacturer) and JR Clancy (a rigging equipment manufacturer), found by Kenny in Protocol magazine. Yes, an ad agency or marketing manager probably just pulled some stock images – but they could have been stock images that actually integrate creativity and engineering along with gender. The ad is a throwback to a kind of 1950s view of gender in which women are delicate ballerinas and men are sturdy workers who can handle tools. One female set designer saw the ad and commented, “I’m going to stop specifying Wenger and JR Clancy.” A close friend, a corporate communications executive for major technology company summed it up nicely, “Oh, for Pete’s sake!”

I picture a young woman, perhaps a major in theatre or entertainment technology at your local community college, flipping through Protocol magazine, seeing the ad, and subconsciously (or even consciously) saying to herself, “I’m not a ballerina and I’m not a dude – this job isn’t for me.” This company, this magazine, and the entire industry needs to do better at portraying itself if it wants to be welcoming to women. We can wear tool-belts and rigging harnesses too. Maybe if we could just find pants with real pockets…

Linda Essig is Dean of the College of Arts & Letters at Cal State LA and principal/owner of Creative Infrastructure LLC. The opinions expressed on creativeinfrastructure are her own and not those of Cal State LA. You can follow her on twitter @LindaInPhoenix.
View all posts by lindaessig →
This entry was posted in Institutional Infrastructure, Technology and arts and tagged entertainment technology, gender inequity, JR Clancy, LDI, stage rigging, theatre technology, Wenger, women in theatre. Bookmark the permalink.