Several years ago, I walked onto my campus and saw a swastika and two SS signs scrolled in chalk on a wall. They were high enough on the wall that whoever placed them there had to do so with some thought, intention, and a ladder – or at least an accomplice or two. I reported the sighting to campus police who said I should call facilities to have it removed. “I’m reporting it to you because it is hate speech that creates a hostile environment for faculty, staff, and students.” Surprisingly, the intake officer replied, “it’s not directed at a specific group or groups so isn’t our responsibility.” I replied that it is very much directed at a group that I belong to and thus it created a hostile environment for me. The markings were removed that day and, eventually, I received a personal apology from the university police chief. 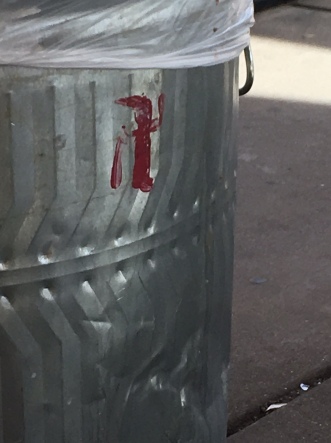 I bring up this incident by way of reminder that the recent spate of hate directed against people of minority faith – Jews, Muslims, Hindus, Sikhs, and so on – is, sadly, nothing new. It does, however appear to be more prevalent and more public now than it has been at any time since the last “America First” movement in the 1940s. The hateful rhetoric of the election campaign, now enacted in policies and executive orders, seems to have given people permission to express their biases with pride (White pride). Yesterday, I was on the campus of a central Phoenix public high school as a volunteer judge for a speech and debate tournament. I sat down under a ramada to eat lunch and noticed a red marking on the trashcan next to the table. Yes, a swastika, hastily scrawled with paint marker.

Symbols matter. Artists are uniquely qualified to not only communicate symbolically, but to convey symbolic meaning. When artist Ana Teresa Fernandez paints a border wall the color of the sky, she both makes it seem to disappear as a symbol of the border, and conveys meaning about the ephemeral nature of the border itself. As I continue to gather background material for An Ouroboros: Art, Money, and Entrepreneurial Action, I keep coming back to a 2007 article by Galloway and Dunlop that critiques definitions of cultural and creative industries in terms of, well, industry, and instead write that arts and culture products “are about the production and circulation of symbolic ideas. Cultural activities thus play a central role in the freedom of human expression, and this provides a direct link to questions of democracy.” We need artists now, more than at any period in my lifetime, to convey symbolic meaning in support of democracy and inclusion and to fight back against the symbols of hate that are far less artistically deployed.

Linda Essig is Dean of the College of Arts & Letters at Cal State LA and principal/owner of Creative Infrastructure LLC. The opinions expressed on creativeinfrastructure are her own and not those of Cal State LA. You can follow her on twitter @LindaInPhoenix.
View all posts by lindaessig →
This entry was posted in Culture and democracy, Institutional Infrastructure and tagged America First, Ana Teresa Fernandez, Galloway and Dunlop, Hate speech, Ouroboros, swastika. Bookmark the permalink.