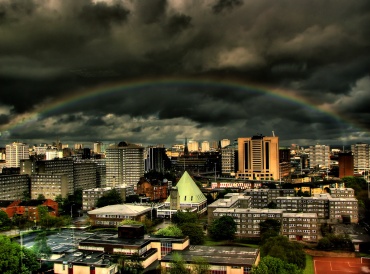 News that Scotland is considering implementing a universal basic income (UBI) scheme came just as I was finishing reading Ryan Avent’s excellent The Wealth of Humans . as background for my sabbatical project. Avent is a proponent of UBI, while also recognizing some of its faults. I am too, because UBI can not only reduce poverty, but can also support both early stage entrepreneurs and artists. Avent notes that UBI could free people to “support a socially valuable (if frequently unprofitable) life producing art or music, or craft goods or services.” UBI could likewise support early stage entrepreneurs who would not otherwise enter the market with an innovative new product because of both the opportunity cost and risk to basic subsistence. UBI can fill in the gaps created by automation (think about the supplemental income that will disappear when Uber buys a fleet of self-driving autonomous cars). Finland begins its UBI experiment this month. The world is watching; the arts sector, especially, should be.

(Photo by innoxiuss – Somewhere under the rainbow, Finnieston area of Glasgow, CC 2.0)

Linda Essig is Dean of the College of Arts & Letters at Cal State LA and principal/owner of Creative Infrastructure LLC. The opinions expressed on creativeinfrastructure are her own and not those of Cal State LA. You can follow her on twitter @LindaInPhoenix.
View all posts by lindaessig →
This entry was posted in Arts entrepreneurship, arts infrastructure, Arts policy, Culture and democracy, Institutional Infrastructure and tagged Finland, Ryan Avent, Scotland, UBI, universal basic income, Wealth of Humans. Bookmark the permalink.