A basic question that comes up often at meetings of arts entrepreneurship educators is “what should we be teaching?” As I was preparing to write the editor’s introduction to the Winter 2016 issue of Artivate: A Journal of Entrepreneurship in the Arts, I realized that two articles in the issue as well as two additional articles we had recently published all contained studies of just that question: “What are the crucial skills for arts entrepreneurs?” Through both qualitative and quantitative inquiry, the four articles described several overlapping families of skills that I summarized in a table: 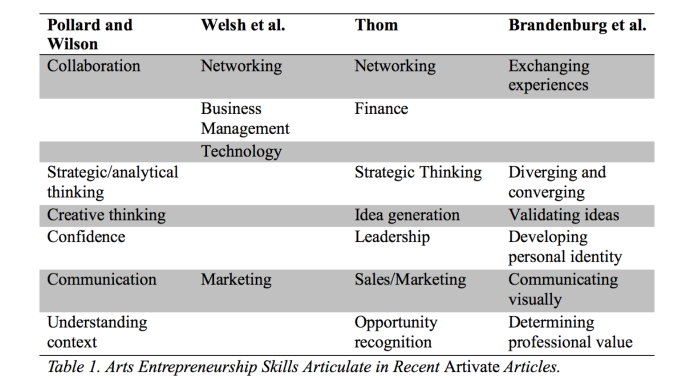 The skills families include networking, especially networking for collaboration (which is confirmed by some other research we’ve done recently); hard skills for business, although this is only considered crucial by 2 of the 4 research teams; two modes of cognition: the strategic and the creative; confidence or “self-efficacy” (which I’ve noted earlier is best taught or developed experientially); communication, including marketing communication; and understanding context and recognize opportunity, a core competency for entrepreneurs in any field.

With this summary, the core competencies for arts entrepreneurship begin to emerge, signaling the beginnings of the maturation of the field itself.

Linda Essig is Dean of the College of Arts & Letters at Cal State LA and principal/owner of Creative Infrastructure LLC. The opinions expressed on creativeinfrastructure are her own and not those of Cal State LA. You can follow her on twitter @LindaInPhoenix.
View all posts by lindaessig →
This entry was posted in Uncategorized and tagged Artivate, arts entrepreneurship, cognition, core competencies, Creativity, crucial skills, entrepreneurial skills, marketing communication, networking, opportunity recognition, self-efficacy, strategic thinking. Bookmark the permalink.