There are a few intersecting threads of conversations – even protests – on college campuses that we would do well to separate from one-another. Conflating them obscures their importance and will likely prevent real change from happening. The intertwining is complicated, but following Roxane Gay’s lead, I’m going to try to put my perspective out in the ether. Unlike Gay’s, my perspective is from a position of White privilege; I cannot see the world through the eyes of my students and colleagues of color. What I can do is be transparent about my approach to these difficult issue. 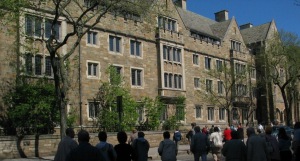 Yale’s Calhoun College, named for the former vice president and proponent of slavery is one of several symbols of white hegemony that have been the subject of controversy. (Photo by GK tramrunner229)

Colleges and universities must create environments that are as welcoming and open to students of color as they are to white students in every dimension. The student body of a public university, especially, should look like the state it serves. So too should the faculty body – and until it does, the student body won’t. Even here at ASU, to which I was attracted from UW-Madison in part by its greater diversity, its almost 20% Hispanic/Latino student population (in a state that is 30% Hispanic/Latino) is served by a faculty that is just over 7% Hispanic/Latino. (I use the term “Hispanic/Latino” because that is what is used in the reports I consulted; most people I know in this group self-identify as “Latino.”)

The institutionalized racism students feel at Mizzou is real and is exemplified – not explained – by the fact that its former president (good riddance!) tried to define institutionalized racism by blaming students of color for a lack of imagination. The institutionalized racism at Yale is real and is exemplified not by the reaction of one staff member to a memo suggesting students be sensitive to cultural differences in their Halloween costume choices but by the fact that such a memo was deemed necessary at all. We should not assume students who speak out about racial inequality on their campuses are asking to be coddled but rather demanding to be served with the same respect as their white peers.

The reason such a memo at Yale might be necessary leads us to the other thread of conversation – the relationship between difficult material and academic freedom. We university faculty need to teach the difficult material about race, religion, gender, sexuality, inequality, and on and on, free from restrictions on our syllabi and our assignments so that our students leave our classrooms equipped to understand the context within which institutionalized inequalities develop. We need to have in our classrooms not only those students who are attracted by the inherent complexities of critical race studies, gender studies, area studies, but also those students who are repelled from such classes by their own ignorance and bigotry. The idea of “safe space” is important so that students can critically and deeply examine their own belief systems and those of others in their communities. But a safe space is not created by shutting down speech, it is created by welcoming all speech and supporting the speech of those who have historically been kept silent. Roxane Gay nailed it in her Op-Ed today:

I want to challenge students and be challenged. I don’t want to shape their opinions. I want to shape how they articulate and support those opinions. I do not believe in using trigger warnings because that feels like the unnecessary segregation of students from reality which is complex and sometimes difficult.

Rather than use trigger warnings, I try to provide students with the context they will need to engage productively in complicated discussions. I consider my classroom a safe space in that students can come as they are, regardless of their identities or sociopolitical affiliations. They can trust that they might become uncomfortable but they won’t be persecuted or judged.

[I decided to write down my thoughts about this after my son told me he had been part of a three-day protest at his own college library, on a campus that looks more like the world than my own with 43% students of color. I don’t know the percentage of faculty of color, but based my own observation and my inability to find the number, my guess is it doesn’t come close, which, in part, was why the students were protesting.]

Linda Essig is Dean of the College of Arts & Letters at Cal State LA and principal/owner of Creative Infrastructure LLC. The opinions expressed on creativeinfrastructure are her own and not those of Cal State LA. You can follow her on twitter @LindaInPhoenix.
View all posts by lindaessig →
This entry was posted in Higher education and tagged #HigherEd, Mizzou, Roxane Gay, Yale. Bookmark the permalink.