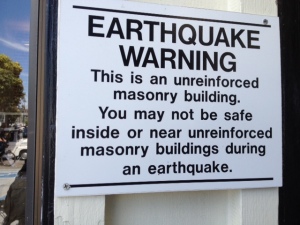 I saw this sign outside a little brick building in Sausalito::

I read this sign and have the information I need to make a choice about whether or not to enter the building, which houses a coffee shop. If I had a five-year-old child with me, I would not even mention the sign and make a choice on her behalf. With my teenage children, I would point out the sign and say, “What do you think – do you want to go in?” (A question that would be met, no doubt, with some eye rolling by said teens.) The chance of an earthquake during the brief time it takes for us to grab a coffee or a snack is slim, even here in the Bay Area. If I were chaperoning a class field trip of teens to the region, I would probably include in the permission slip materials that are standard parental reading in advance of a field trip, “Please note that on this trip, a brief time will be spent in unreinforced buildings.”

The earthquake warning sign brought to mind recent events at my home institution at which high school students attending a music festival saw a short scene from Rent as part of a larger showcase of School of Music offerings. Neither students, nor teachers, nor parents (or even, apparently many School of Music staff) were told in advance that the scene that was shown, “La Vie Boheme,” included simulated sex and partial nudity. However, the description of the full production mounted in Tempe, is as follows:

Winner of the Tony® Award for Best Musical and the Pulitzer Prize for Drama, RENT has become a pop culture phenomenon with songs that rock and a story that resonates with audiences of all ages. Based on Puccini’s La Boheme, RENT follows a group of impoverished, young Bohemian artists and musicians struggling to live in New York City’s Lower East Side. Filled with humor and poignancy, love and laughter, these voices sing out to us about the struggles we all face today. The music rocks you to your soul and will leave you singing hits such as La Vie Boheme, Seasons of Love, Tango: Maureen, Take Me or Leave Me and many more. RENT is a modern classic about falling in love, finding your voice and living for today. This show is verbally, sexually, politically and culturally charged. It is meant for mature audiences only.

Adequately informed by this description, audience members — including parents or teachers acting as agents for their children — can make choices about whether or not to attend. For myself, I would encourage my teens to see a good production of good work that is “verbally, sexually, politically and culturally charged” but would provide them with the agency to make their own choice. The point at which parents transfer such agency to their minor children is a personal choice, however, and not one that should be dictated by a third party, be it school, arts organization, or faith community.

I digress, a bit however. The point I really want to make is about an artists’ responsibility to know, understand, and engage their audience. In a response to an online petition related to the Rent incident, my colleague David Schildkret made this point eloquently, “The students in the audience did not come to see Rent…This is not about a few offended parents. It is about the responsibility of artists to know their audience…the question is not whether Rent itself is problematic. The question is whether this was the suitable occasion for this particular performance.”

The Sausolito coffee shop (and likely the city ordinance that requires the signage) understand its audience of Bay Area residents and visitors. The sign would be both unnecessary and misplaced in Phoenix.

There is, however, a key difference between the earthquake warning sign and the production’s disclaimer. The former is a warning of a physical situation that can cause bodily harm, the latter could be considered a “trigger warning,” and trigger warnings have reached, according to my cousin Laurie writing in the Chronicle of Higher Education, tsunami levels, especially in academia. Art functions to change our perspective on the world or, as Anne Bogart writes, “to wake up the asleep.” If we are constantly “warning” our audiences rather than engaging them, we could end up with a bifurcated culture made up of those who view such disclaimers as information and those who view them as caution signs or, put another way, those who experience the beauty and breadth of art and those that choose not to experience art out of fear that it is too highly “charged.” If we can know our audiences and initiate two-way relationships with them, we can engage them with highly charged material in a way that benefits both artists and audiences. I close by repeating Laurie’s closing:

The world is a painful and anxiety-inducing place, and human representations of the world are often painful to consume. But rather than retreating into a world where our courses are reduced to viewings of My Little Pony, let’s all put on our big-girl panties (or big-boy tighty whities, as in the case of the Wellesley statue) and face that world together. Let’s talk about it, think about it, write about it, analyze it, and, in the end, learn to engage fully with all of it, even those parts that cause us to curl up in pain and sob. Because that’s what a real education requires, and limiting ourselves to pretty images of rainbow ponies is not enough to know the world.

Linda Essig is Dean of the College of Arts & Letters at Cal State LA and principal/owner of Creative Infrastructure LLC. The opinions expressed on creativeinfrastructure are her own and not those of Cal State LA. You can follow her on twitter @LindaInPhoenix.
View all posts by lindaessig →
This entry was posted in Arts education, Culture and democracy, Higher education and tagged audience engagement, Rent, trigger warnings. Bookmark the permalink.