My first full day in Tbilisi yielded two observations: 1) planning here is a very fluid process and 2) this city has been through a lot. The day was largely unstructured, with only two activities scheduled: an afternoon visit to the IREX multimedia education center at which the workshop and conference will be held and a radio interview 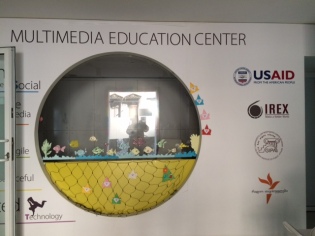 The conference venue is a multimedia education center run by IREX

for an English language radio show hosted by Radio GIPA (Georgia Institute of Public Affairs). The rest of the day was spent variously in coffee shops and my host’s car as we did things like visit a print shop and chatted about the goals of the organization that brought me here: Creative Initiatives. 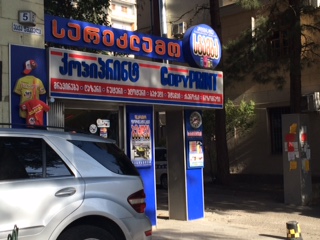 The print shop we visited in downtown Tbilisi

Throughout the day, Nino and Gela fielded emails and phone calls, massaging the conference schedule in response. Speakers were added; times were changed. Ultimately, the program order was adapted – for good reason – based on the confluence between the content of my keynote address and that of two attendees from Russia who would be presenting on a creative industries incubator in that country. The fluidity of the scheduling process, and the day as a whole, may have annoyed or frustrated me in the US context, but it seems to be the norm here and leads me to appreciate the lower level of anxiety such fluidity and flexibility both requires and engenders. (Periods without internet connectivity have also been a welcome respite.) This fluidity carries over to the lane markers on the roadways, which seem to be considered by Georgian drivers to be only suggestions – but I digress.

The main traffic circle in the center of the city is marked by a soaring monument to the 2008 Russo-Georgian war, the remains of which are still present in the Russian occupation of the South Ossetia region, about 80 miles north. Nearby is the April 9 monument, commemorating the 1989 protest in what is now Freedom Square, during which over 20 protestors were killed by Soviet troops hanging on to the last vestiges of their control of the city and the country. The civil war that followed led to economic and social decline that Georgia is still climbing out of 25 years later. Little attention has been paid to building codes, zoning, and the like. As a consequence, 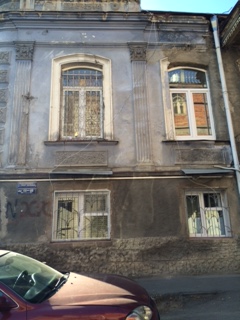 the facades of many buildings are decaying, the brick understructure showing through the Soviet-era concrete or European plaster decoration that preceded it. The scars of the city were made real to me when one of my hosts pointed to one of these crumbling buildings (not pictured here) and explained, “This is my grandmother’s house where I was born. My grandfather was executed by the [Stalinist] communists in the 1930s.” There is beauty here – but you have to look for it and see it in its historical context. 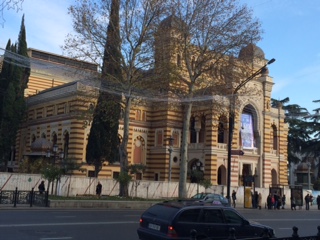 Linda Essig is Dean of the College of Arts & Letters at Cal State LA and principal/owner of Creative Infrastructure LLC. The opinions expressed on creativeinfrastructure are her own and not those of Cal State LA. You can follow her on twitter @LindaInPhoenix.
View all posts by lindaessig →
This entry was posted in Arts entrepreneurship, arts infrastructure, Arts policy, Culture and democracy, Higher education and tagged April 9, arts entrepreneurship, Creative Industries, Creative Initiatives, GIPA, IREX, Russo-Georgian war, Tbilisi. Bookmark the permalink.